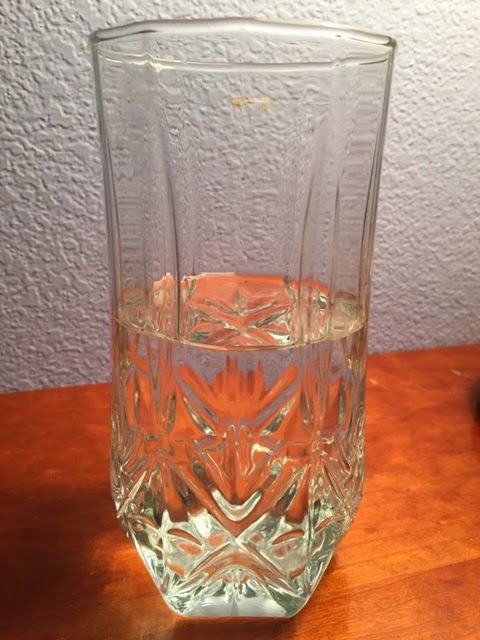 Recently I've had people say to me, when they learn I've been widowed, well, you know he'll always be with you. I know they say that with all the best intentions...and in a way, I agree, because yes, he will always be in my heart. But it's not as easy as that. Regardless of what my personal spiritual beliefs are, saying something like that can sound awfully close to someone wanting to gloss over the tragedy of the death of my husband and what it means for me in my own life. Easier to say that and hope the conversation will move away from the uncomfortable subject, right? Or am I being difficult here? What do they expect - that I'll say, oh, he will? Well that's great, I feel so much better now! Thanks for letting me know!

I do have my own beliefs about what happens to us when we die. And I have my own suspicions about how Mike occasionally makes his presence known...the wind. The birds.

Most recently, a grasshopper. I'm sure it's not the same grasshopper, because it's been happening for months, but at certain moments that will only ever be truly meaningful to me, there it is...on a doorknob, on a light switch, on my computer screen...so much so that I have taken to sighing, rolling my eyes in a playful way and saying hey, Mike. Thanks for being here. Miss you. Love you. Or something like that.

But you still can't tell me he's really here. Even if he really were that grasshopper for that moment, or using it to somehow tell me he's around...it's still not really him. He's not sitting here in his full, living body, talking to me, touching me, arguing with me, walking next to me, holding my hand...he's not here, and he never will be, ever again. I can never talk to him again. I can never ask him questions, hear him sing, or wonder what time he's coming home.

So, while I want to believe in the grasshopper...I don't want people to say in some wishy-washy way he'll always be with me. Can I have it both ways? Is it fair to want to tell people to go to hell when they try to reassure me (I don't, but I want to), and then try and explain about an insect in the next breath?

I really do feel like a walking enigma. My thoughts and feelings are so all over the chart I even puzzle myself some days. All I can tell you is that grief can be difficult to define or delineate, especially to anyone on the outside.

First of all, no one goes through exactly the same experience. We all have our own stories of grief. We might have lost them through sickness, accidents, suicide, war...it might have been a terrible, long process, or a sudden unexpected moment.

Those of us in the middle of it all know by now that the process of our bereavement, the timetable of our grief, doesn't follow any plan, or clock. It may chug along at a fair pace, as life begins to fill in those empty spaces. Other times, or for other people, an eternity passes between each tick, and "life" feels very, very far away. I often have both sensations going on at the same time.

I guess it's just complicated. As my genius friend Sarah says: the cup is not half empty or half full. It's both. I'm a strong person and nowadays in public I'm fairly even-keeled and doing pretty well. But I have my moments - moments usually no one but those closest to me know about. Sometimes, it surprises people that I'm still talking about it, writing about it, missing him, grieving him.

I try and explain how that can be...how I can seem relatively fully-functioning on one hand, and yet come out with all this grief on the other. But I can't really explain it. Nor can I speak for anyone else and their grief; it's just how it's happening for me.

Even though I can claim to have experience and understanding of a deep and abiding grief in a way I never imagined I would have this early in life, I also feel like I have no business telling anyone else what to expect or how to deal with it. Nor, may I say, do I appreciate anyone else other than my grief therapist telling me what to expect, how to experience it, what to think, how to behave, or what I should or shouldn't be doing with it, or about it.

I don't have an ending to these thoughts...I don't feel like these thoughts will ever end, or that there will ever be a tidy summation to grief. So for today, that's all there is.
Posted by Unknown at 12:00 AM