I have struggled off and on with the fact that my husband did not leave me a suicide note.

I am once again struggling with this. I have been for weeks now.

Through talking to other suicide widows, I know that the suicide note doesn't always bring comfort. It often times places blame, doesn't make any sense, or just flat out, doesn't bring ENOUGH love and affection to such a horrible situation.

But there are times like now, that I wish I could pull out the note, and read it. Maybe to be reminded of what a dire state my husband was in. That death was his only option. Or just to see “I love you” one more time.

While I have been battling with this for weeks, it dawned on me that I did in fact get a suicide note.

For some reason I forgot about this note. I couldn't remember what it said. I forgot where it even was. Did I even keep it?

Through sheer fear that I didn't keep it, I opened the old steamer trunk I keep most of his belongings in. It’s one of those things I rarely open, let alone dig through. It sits at the end of my bed, looking pretty, but hidden inside is a life lost to suicide. A lifetime, a marriage, a friendship and companionship that is lost.

When I opened the trunk, I bent down.. and lost it. I just sat and cried. I sat and breathed in the smell of the trunk. I carefully looked through some items. Carefully as I didn't want to damage anything inside, but also being cautious as I knew I was walking into a land mine that could take me weeks to recover from.

Carefully guarding my heart, I searched. There hidden away is pictures, cards, things that were in his pockets when his body was found (still in the sealed bio-hazard bags).

I looked at his wallet. Still full of pictures of us, his credit cards, drivers license, and money. Money I refuse to spend no matter how bad things get. I looked at his glasses, and remembered how handsome he always looked in them. Looked at the only piece of his clothing that I kept, his favorite red hoodie (All his other clothes were made into a quilt, matching pillows, and a couple of throws). I was a little shocked that the smell of cedar from the trunk, now reminds me of my husband. How can the smell of an old steamer trunk, now remind me of my husband? I haven’t opened the trunk in probably a year.

I however did find the suicide note he sent me.

I remember getting the post card. My husband was in a physic ward after spending some time in intensive care. I opened the mail box, and my heart shattered. There on top of all the junk mail and bills, was a picture of Delicate Arch in Arches national park. The same park my husband was found in after his attempt. 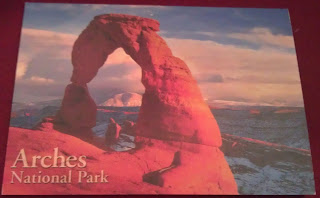 I thought reaching into the mailbox and pulling out the post card was going to kill me.

This post card has long been forgotten. Shoved into the trunk with the rest of his life.

Finding this (and realizing it wasn't lost forever) brought me some comfort. There in his own writing, a small glimpse of his pain and “Love you with all my heart.” Signed - Husband. The nickname I called him for years.

It was a reminder of how much pain he was in. Brought back memories of his suicide attempts and memories of his last attempt. His final attempt.  I think the post card was a way for me to find his body. A not so obvious map, so I could have lead detectives in the right direction.

But more than anything, it was also a reminder that in his last moments he thought of me. Loved me.  And was sorry for the pain he was about to put me through.

I don’t think I ever spoke to Seth about the post card. I remember hiding it away in a file in my office shortly after I got it. At some point I must have moved it to the old steamer trunk.

Now that I remember I did in fact get a suicide note, and my husband did in fact say one last “I love you” I think I can finally put this struggle behind me.

And put the post card back in the trunk, where it will always be.. just in case I need to be reminded again.
Posted by Unknown at 12:05 AM