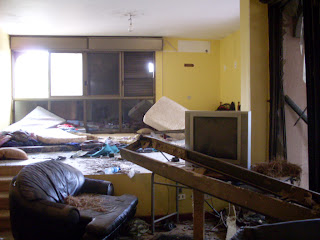 I stand helpless as the first thing I see fall is the painting that hung over the mantel.  The sound of the windows rattling grows and the ground beneath my feet tries harder and harder to make me fall down.  One by one, knick knacks start to tip over and roll off shelves, falling to the ground and smashing into pieces – too much damage for even Humpty Dumpty’s men to put back together again.  I resist my gut instinct to try and catch the falling pieces, I don’t know which part of this room will start falling apart next, and I could get hurt if I don’t keep my eyes open.  Better wait until the shaking stops.
The small table with a lamp on it is shaking, and it’s even money whether the table tips, taking the lamp (a lamp I’ve carried around with me since I was a kid and all of the good memories I associate with it), to the ground, joining the other broken knick knacks.  As I watch the bottom of the lamp start to weave back and forth like a top, the shaking stops.  However, some objects still love finishing the course of momentum, and then they too become still. “It’s over.”  I say to myself and look around the room.  There will be plenty of clean up.  This will be longer than a weekend project, and it is abundantly clear that even after the cleaning is over, this room will never look the same.
I’ve worked on rebuilding the room for quite some time now, and although not thrilled at the parts of my room that I’ve lost, I am starting to accept my new normal of this layout.  I even moved the lamp to a bigger table that sits right below a shelf of my favorite books.  It’s different, but I’m dealing with different.  I sit in my chair and try to acclimate myself to all of the changes.  That’s when an aftershock comes and shakes the room.  It’s a small aftershock, lasts for only a few seconds, and not strong enough to rattle the windows or shake my lamp - which my eyes go to immediately. But what I didn’t realize is; during the first earthquake, the shaking of the room loosened my book shelf so much, almost all the brackets came out of the wall.  It was only being held by one small screw.  The aftershock loosened that screw, and the shelf, with all of the books on it, comes crashing down on my lamp, destroying it into pieces.
Last week my wife’s step-father passed away.  He fought a really good fight.  Back in 1992, he was involved in a bad car accident.  Doctors thought he wouldn’t make it. He recovered, moved out to Arizona, and even though he had an array of health issues, lead an active life and lived for what ended up being another 30 years.
If he had died before Lisa, I probably would have been less sympathetic. “Well, he should have never survived anyway, so good for him.”  But I’ve already had an earthquake, and he was an aftershock.
When I heard the news of his passing, the first thing I did was equate him to Lisa’s death.  Experiencing an aftershock always brings me back to thoughts of the earthquake.  So after beating myself up that Lisa is gone and reliving all the “ should’ve, would’ve, could’ves”, I  put into perspective what his death means to others.  I think of his new wife, who has been care giving for many years.  How will she deal with her new life’s routine?  I think about his 102 year-old mother who is still alive – yes, still alive -and living in his house.  She will not handle it well, but her lack of memory will cure some of that pain.  Then of course, I think of Lisa’s sister, Andrea.
She had quite a year in 2008.  She lost her mother in April and then lost her sister in July.  I’m sure there are people who heard the news of the death of Andrea’s father  and thought, “Sad, but at least he was older and lived longer than he should have.”  I myself would have probably been one of those people, if I hadn’t lost my Lisa.  But now I know that even though this is an aftershock for her, she is sitting in her room looking at more pieces that have fallen and is faced, once again, with looking to redesign another new normal.
Posted by Matthew Croke at 12:01 AM