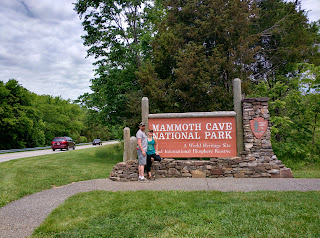 Today, as I sit down to write with tired eyes, I must admit that although I miss Megan as much now as before, it has shifted over these past few months from an intense grief at the thought of her death to more of a longing for her to be present to witness where life has taken me since that time.

I have just returned from an extended weekend in Kentucky with an amazing woman named Sarah, who also happens to be the same Sarah the writes here on Widow's Voice every Sunday.  We met at Camp Widow East in February, completely by chance and/or fate, depending on your beliefs.  Neither of us had any intention of finding someone new at that time, but here we are. Three months after meeting, Sarah and I are a couple.  Not a day has passed since February 5th that we have not talked, and this past weekend, we were finally able to close the 1400 miles of distance, and bring our lives into the same physical space for a few days.  It was wonderful.

It's an odd thing, not only being a widower, but being with a widow.  Both Megan and Drew are eternally present in our lives and hearts, but now, after endless hours on the phone or Skype, I can almost feel Drew as a friend of mine.  It's as if I know him personally, and there are even moments where I mourn his loss.  There is no jealousy when Sarah speaks of him. In fact, I love that she gets that wide eyed, contented joy when describing an event or memory with him.

Of course, there is always the thought that had Drew or Megan not died, neither of us would have met the other, but there is also the thought that had they not existed, it would have also prevented us from meeting.  The two of them made Sarah and I who we are.  I am thankful for Drew's love towards Sarah, and her love for him, because she would not be the same person without him.  I took Sarah to a restaurant on the Ohio river immediately after picking her up at the airport called "Drew's", simply because of the name.

Just as I feel a connection with Drew, I can feel the same connection between Sarah and Megan.  There is no competition between them.  They are not the same person, and although there is a multitude of similarities, there are just as many differences.  Megan would love her and her attitude (primarily because they both make fun of me).  That's how I knew that Sarah was not a "band-aid" or a "rebound".  I have not once looked at her and thought "well, Megan did it this way, and that means Sarah's way is wrong"

Although I am filled with happiness about Sarah, I am struggling to find a poignant, teachable moment.  I can't suggest that any widow or widower who is ready to date go out and find another widow, because not only are there good people outside of our "club" that could be just as compassionate and understanding, but there also remains the fact that I wasn't ready to date.  Fate happened.  She sat down at that table at Camp Widow, and we clicked.  I had no choice in the matter, and now we've fallen for each other.  We may have been tailor made for each other, but it's not because we're widowed.

I guess that the smartest thing I did was keep my eyes, and my heart open.  Just as I knew that I wasn't ready to go looking for someone else, I also knew that I shouldn't prevent a good thing from happening.

I hope that Sarah and I's relationship can give some hope to other widows and widowers, and inspire people to realize that although we may have lost the loves of our lives, that when they were lost, we were given a new life, and a chance to have a new love.