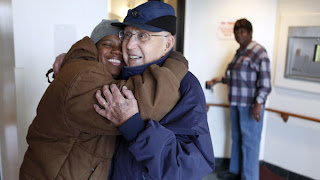 Please bear with me today as I may be stretching the concept just a little.  Our community at St John Brebeuf School lost a treasure Thursday.  I've known Uncle Pete since I was in first grade.  After Lisa passed away he was there for me right away and keep me busy and focused on what is still important in life.  I write this for him today.  Sorry for the length of the piece, he was just so special.


I remember in 2007, coming home from work and my seven year-old daughter is standing in the foyer, both arms stretched out, hands filled with candy.  A smile is on her face that is normally only reserved for Christmas morning or grilled cheese sandwiches past bedtime.

“Look Dad,” she says. “Look at all the candy I got from school.  Uncle Pete came in our classroom and said ‘Where’s Haley Croke?’ I was nervous but went up and he was holding a tub of candy.  I reached in and grabbed some but he said, ‘God gave you two hands didn’t he? Then get two fists full of candy!’”

I nodded my head in understanding, of course, Uncle Pete.  Even at 86 years old, still barging into classrooms and singling out children to grab fistfuls of candy while the rest of the class has to watch.  Pete never worried how to make everyone happy, just those who needed it most.

“Uncle” Pete Zonsius was the custodian for St John Brebeuf Catholic School in Niles when I was a student there.  In our minds, he was the one who ran the place; sure we had nuns as principals who we would be respectfully fearful of, while trying to push the limits.  But when Scott Dugan took a marker, drew all over the boys bathroom, and Pete was storming down the hallway looking for the culprit, we sat at our desks shivering, praying “Please God, don’t let Pete ask me if I know who did this”.  Pete got us to pray more than any priest or nun could.

Pete also had a gentle touch and was the guy who we would go to if our tooth was loose.  Have a loose tooth? Raise your hand, go see Pete, and come back with a bloody napkin and a hand full of candy.  He outdid the tooth fairy every time; you would curse the day you lost a tooth on a weekend.

When you reached 8th grade, all the boys knew that this was the year where Uncle Pete would come bounding into a classroom – a trait I see he was still doing at the age of 83 – and point to five or six boys and we would get to leave class and set up Flanagan Hall for Bingo or a weekend event.   Looking back, I’m sure the teachers were not pleased that kids were being pulled out with no notice and gone for an hour or two, but not a one would raise an objection.

As the year went on, Pete would eventually find a set of boys he liked more than others and would use them on a consistent basis.  We all knew this and we tried our best to fall into favor so we could keep missing classes.  Pete figured out Survivor 20 years before TV executives knew this was compelling viewing.   One day, I was standing next to George Martin and we both had our hands in our pockets waiting to be told what to do.  I happen to see something on the floor and bent down to pick it up.  When I stood up, there was Pete glaring at George, “You have nothing to do but put your hands in your pockets? Go back to your classroom and waste someone else’s time.  You, set up those chairs under the window.”  I never put my hands in pocket again when working for Pete.

After school was over, he would ask just one or two boys to work during the summer.  I was lucky enough to be asked, and at the age of 13, had my first job: cutting lawns, waxing floors, washing windows, changing light bulbs, and even cleaning out clogged sinks in the convent – which was adjacent to the school.  Uncle Pete was tough, but a fair boss.  He didn’t have time for silliness, there were just too many items on the ‘To Do’ list which seem to grow longer and longer as the summer went on.

Once the summer was over and school started, I would run home from Notre Dame and get to SJB just in time for school to let out and begin sweeping the floors.  I worked for Uncle Pete for about three years, and I left, I walked out thinking I would probably never see Pete or SJB again.  Life was beginning to open up for me, and this part of it was over and done with.

Seventeen years later, when my wife and I were weighing the choices of where to send Haley to school.  We chose St. John Brebeuf because of the strong sense of community.  Uncle Pete was no longer the custodian.  I heard he was doing some charity work now, but didn’t know much else.  Later in the school year, my wife Lisa was pregnant with our third child and was battling breast cancer – a fight she would lose four months after our daughter was born.   Pete must have heard the news of Lisa’s illness through the grapevine and thus the day Haley came home with two fistfuls of candy.  Even though Pete was no longer an official employee of the school, I had something there that was going to make sure Haley was doing okay.

After Lisa passed, people were more than generous with my kids and clothes were donated by the bagful.  I got in touch with Pete and he mentioned that he drops food and clothes to the West side of Chicago to people in need.  I gave him all the extra clothes my kids couldn’t use or grew out of and he asked me if I wanted to ride along to help pass them out.

I drop off my daughter at school and drive around the back to the church parking lot, there’s Uncle Pete loading the van with food and clothes.  He has some trouble walking, but uses no walking aids. He is wearing his traditional blue cap that is a cross between a baseball cap and a hunting cap. He has on his blue pants, blue button up shirt, and his light blue spring jacket. A hearing aid hangs out of his ear connected to a device like an iPod, making him look more stylish than he ever intended. Old age has brought his height down to about 5 foot 8.  His teeth have been replaced with dentures which you constantly see because he is always smiling.

“Good Morning Matt, you ready to make some stops?  It’s cold today, hope you dressed warmly,” he says, grinning to himself as he knows that I’m 40 years younger than him but I’ll still struggle to keep up with his energy.   After all, I was spending a day with Pete.  Not exactly like spending a day with Mary Poppins.  We weren’t going to be popping through chalkboard pictures, no imaginary horse races through the park.

A day with Pete was a little grittier; a day with Pete was driving by a house surrounded by a broken fence and windows that doesn’t close all the way - allowing the curtains to hang out and blow in the wind.  On the steps that lead to that house, sits a man staring off into the sky, half in this world, half wishing for one of less pain.  A day with Pete was stopping in front of this house and getting out and handing that man a box of food.  A day with Pete was me later asking him how he knows that man and Pete responding, “I was making my rounds one day and saw him sitting there, I offered him a box of food and found out he has two kids and is taking care of his mother, I’ve been bringing him food for three years.  That was spending a day Pete.

Uncle Pete lived his life like when he was my boss.  His ‘To Do’ list of people who needed assistance kept getting longer as his life went on, and he didn’t have time to nonsense – or sometimes permission.  He had God’s work to do.  In his mind, he had only one person to answer to, and Pete possessed a drive that got him out of bed every morning and drove through the worst parts of town distributing donations.  And he did this in a city that does not sit at 78 degrees and sunny every day.

I know right now you are not thrilled with me talking about you.  When we would get out of the van after dropping off boxes of supplies around the poorest parts of town, you would always say to me, “Now remember Matt, we keep this between us, nobody likes a big mouth.”  I know Pete, and I’m sorry.  But today people need to know your ministry, and may those touched by your story, continue to help those who you liked to help most, those who needed it most.
Posted by Matthew Croke at 12:00 AM