Read Patiently. There is an Actual Point~

It's turned out, for me, to be all about the hair.

I didn't intend it to play out like this; it just has.

Shortly after Chuck died, I cut my hair off to the scalp.  Short, short, short.  First scissors then a razor.  It was done in a violent manner, in a way that I hoped would allow me to release some of the devastating pain of his forever gone-ness.  It didn't matter to me what it looked like.  I had no interest in my appearance in any case and somewhere inside of me was the thought that maybe by the time it grew out long again, the grief would be less.

In the 19 months since I was left behind, my hair has grown out a bit.  I trimmed it at one point, not even an inch, and by now I'd guess it's probably below my ears.  I say probably because the proper length doesn't show since I had it dredded into what I call Lovelocs.   My hair is longer than it looks but it's a mess and I kind of look like Medusa unless I wear a scarf to hold it back.  Which I do for now and will until the dreds grow into what they're supposed to look like.   Again...and still...I don't really care what it looks like because there is an intent behind it.

I sat for 9 hours to get my dreds in and not all of my hair was long enough at the time so I'm still working on the bottom layers.   Dreds can take up to 4 months to even begin to look the way they're supposed to and they require quite a bit of upkeep.  Every couple days (more often if I feel inspired), stray hair must be woven into already established locs, and end pieces must be locked into place.  I use a small latchhook with an eye on it for weaving, and my fingertips go numb at times from the tearing and backcombing that forms the locs.   Sometimes my hair looks like I hope it's supposed to look like but mostly not, at the moment.  Which is also okay with me.

All of which is to say, my hair is reflective of my life.  My hair is wild and sticks up in places and is unraveled daily and must be woven into being again.  It must be pulled and torn and tightened and locked into place.  Doing all of this is tiring to my arms as I reach behind my head or hold them over top, doing what must be done to attain what it is I want to attain.   I work at it diligently for focused amounts of time then take a break and come back to it when I feel inspired once again.

I'm a mess emotionally.  I freely admit that.  I still struggle with the shock of the man I love being dead and me being without him.  I struggle with that knowledge during the day and always at night.  Life without him is exhausting and un-nerving and I'm completely uninspired to do anything other than survive.  I feel untethered and at odds with myself and those around me.  Working on my hair, whether harshly backcombing it and tearing it into separate pieces, or more calmly weaving stray hairs into the locs;  it describes me, and my life, fairly accurately as I stumble through this grief into a new, and undesired, world.

Maybe, by the time my Lovelocs develop fully, my life will feel more sane.  Maybe I'll feel more sane.  Meanwhile,  working on them has become a meditation for me.  Daily, loc by loc.  Working on one, then another.   It takes time, and patience, and repetition and determination and due diligence and it isn't easy.

Grief.  Sadness.  Missing-ness.  Creating a new life without him.  And...Lovelocs... 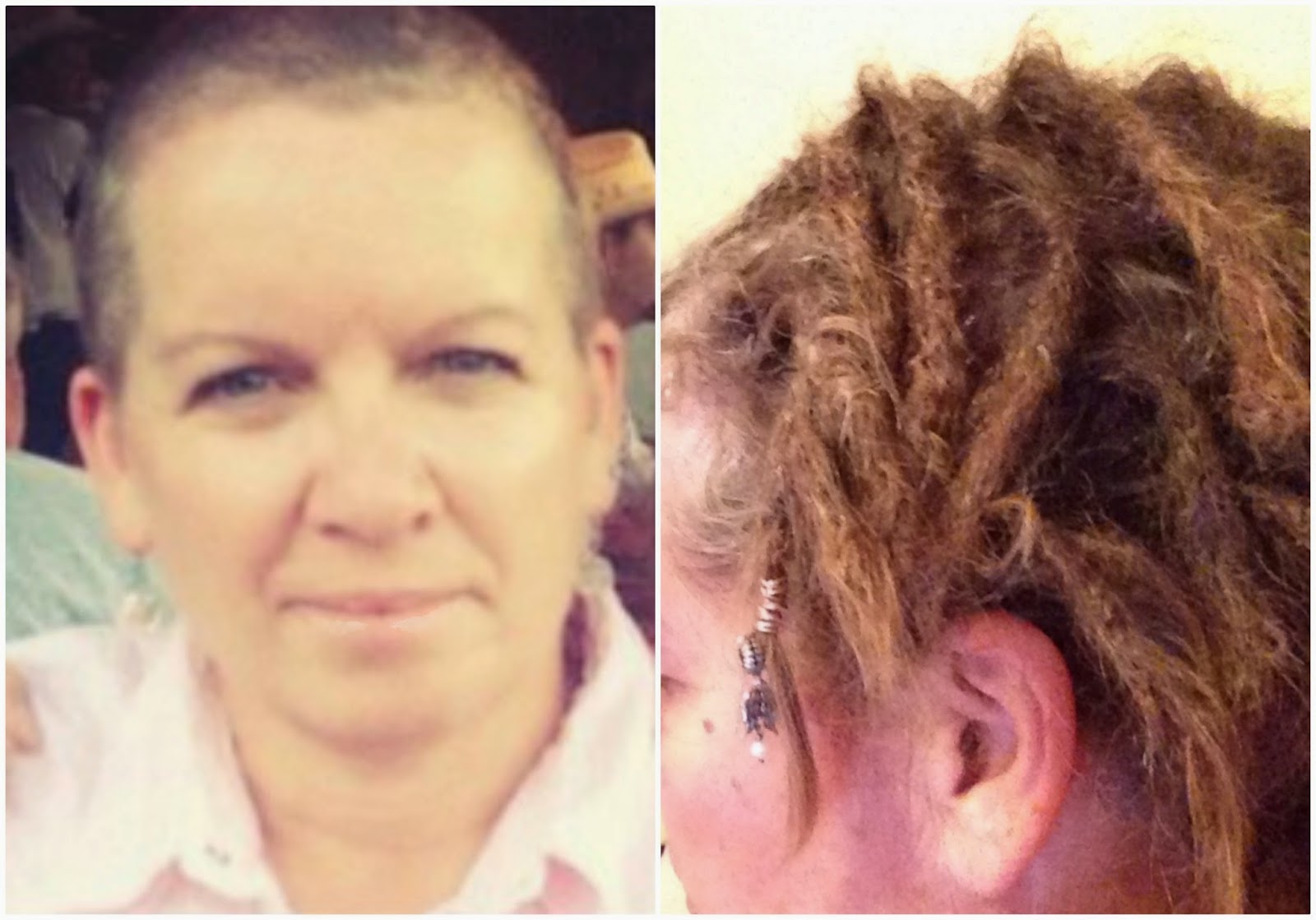