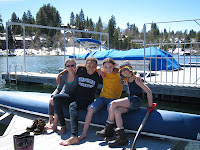 my daughter Pallas (2nd from the left) and her friends
She says to me “Kim, you’re important. Other widows want to meet you. They ask if you will be there.”

I was talking to Michele, the founder of this blog, Camp Widow, Widow’s Village and Soaring Spirits Foundation.

She was trying to convince me to come to widow camp.

I’m important, I whispered to myself. I’m important.
I matter to other people.
I had not felt that way since…
Art died.

The moment Art died I felt like I mattered less.
Like the space I took up in this world was not nearly as important as the space others take up.

I was not a wife anymore.
As a wife I knew I mattered to one other adult. I mattered a lot to him.

As a widow there is no one to call to say “I’m on my way home.”
There is no one to worry about me, or worry with about the kids.
My day doesn’t matter to other people.
They guy who cut me off matters less.
The great deal I got on a dress doesn’t really matter either.
My life and all it’s little insignificant happenings does not matter to anyone else.
It would take days for anyone to realize that the kids and I were gone…or dead.
Without a husband I questioned my matterness.

And it was not until Michele spoke the opposite of what I believed that I saw how I carried around that little belief. I carried it around as sure as I carry around my kids were born from me, that Obama is our president and that I will wake up tomorrow and it will be Sunday.

I don’t matter as much now that I don’t have some to matter to.

That belief just sits there,
quietly,
solidly.
I matter less with no one else to share my life with.

And the thing is I didn’t realize that was my belief until I spoke with Michele.

“I matter,” I whisper again, this time just a little bit louder.
The funny thing is:
if I take a really close look at my life.
if I am honest about who I have become since Art gave me the gift of his death
if I really look at it, I matter more
now
than I did when he was alive.

We matter.
We matter to each other.
Every blog that is discovered at 3:23 am, when a widow is terrified of what has happened to her or him,
matters.

I matter
You matter.

So when you see me at Camp Widow, or out and about in LA, come up and give me a hug.