Here is a riddle:
What is more sad? Going to the movies alone, or going to the movies with a group of friends, who barely speak to each other or acknowledge each other’s existence?
This past weekend, I really wanted to see Gravity. So I went alone. Going to the movies, or anywhere really, by myself, is not a big deal to me. When I was married, and we were sharing our life together, I did lots of things alone. And he did too. We were two very independent people, who loved and valued our time alone, and who also loved and cherished spending time with one another. We loved each other’s company, but neither of us had any issue with doing things by ourselves sometimes. So, I have been to the movies, several times, alone.
But here is something that the “non-widowed” world doesn’t quite understand. Going to the movies – or anywhere – by yourself, because you feel like it and because it’s a choice while married or partnered up – is completely different than going places alone because your husband is dead, and everyone else is coupled up, or has plans, or doesn’t want to – and so you have to. The first one is a decision you make within the luxury of a relationship. The second one often results in severe loneliness, intense sadness, guilt, anger, annoyance, and the kind of soul-crushing isolation that not many people comprehend.
That is how it was for me. In the beginning. The first year and a half or so of this new “after” life. Every time I left my apartment to venture out and do something, was like being dropped off inside of a haunted house. My heart would race, not knowing what emotions or unexpected terrors would be lurking in the corners, waiting for me. I would panic that the movie or the dinner or the Broadway show or the night out with friends or the whatever - would bring up flashes and scenes and fragments – that would further put the focus on my own solitude, or my marriage that was gone, or my future that would not be, or the day that I woke up and he had already gone to work, and then already gone from earth. 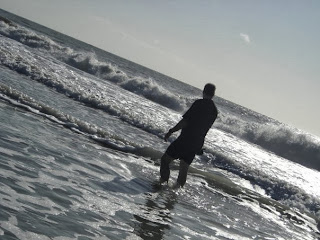