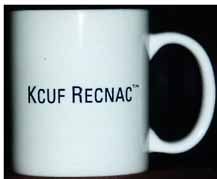 Daniel and I bought these coffee cups after he was first diagnosed with cancer in 2004.  When he got his third diagnosis in 2005, I said I was going to get the ones with it spelled forwards - but I never got the chance.  Cancer beat us to the punch.  F*ck Cancer.

I have recently been on the far sidelines of a horrific cancer story.  A friend of a friend lost his wife to cancer 15 years ago.  Last week his daughter, now in her 20's,  wasn't feeling well, was having a little trouble breathing, and went to the doctor.  She's not left the hospital since...cancer.  What kind of horrific messed up story is that?  He is widowed, raises his only child alone, and now she has cancer too?  When I heard the story I was beyond horrified.  This story is my worst nightmare.  I always think something terrible is about to happen to G, and I know I can't control it....but good lord I guess you sort of hope that your widow card will stop the really really scary crap from happening.

I'm angry for him, and scared as hell for me and G.  I'm not naive enough to still think life is fair.  I've had front row seats to witness that fact.  But come on, there's got to be a line.  I just can't imagine why something as horrible as that has to be "part of God's plan".   I told Carl last night if that happened to us and I still managed to make it to Heaven...it wouldn't last long, they'd be escorting me to the door for trying to kick some heavenly ass.

Fine.  I can live with that. But before I head to the dark side, they have some splaining to do.  Seriously.

Posted by Michelle Dippel at 4:00 AM