Facing Disasters - widowed but not alone. 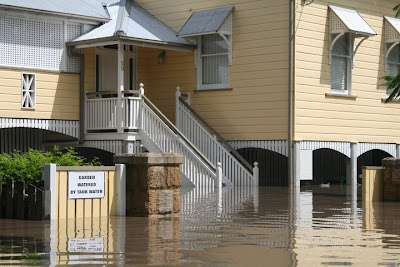 
At the time of writing this (late, I know), I am listening to the news reports of Hurricane Sandy half a world away from me.

My thoughts immediately turned to those widows facing this disaster.

In early 2011, less than a year into widowhood, my city flooded.

My house was relatively unaffected - I was flooded repeatedly, but only by ground water which had been filtered clean by the concrete it had seeped through.  It was more soul-destroying in its regularity than it was scary.  I just had to sweep 3-inch-deep water out the door several times during the day (and night).

But when the power went out and the main flood surge passed us in the nearby river,  I was scared.


I needed someone here to tell me that it would be OK.  That I was a sensible woman who could cope with this.  That I had prepared well by packing emergency bags and securing the house.

But mostly what I needed to know was that I was not alone.

....and that was when some neighbours I vaguely know who live a block away, but high up on the hill knocked on my door just to let me know that if the need arose, I was more than welcome to shelter at their house.

Just knowing that these ordinary people who knew my recently widowed situation cared enough to check on me was exactly what I needed.  I knew I was being looked after.  I knew I wasn't alone.

So if there is one thing I want to say tonight, to anyone facing a disaster who thinks they are alone .... I hope that you also are surrounded by kindness by friends and neighbours, and by all the hope and love that the rest of your widowed community can send.
Posted by Amanda at 1:20 AM