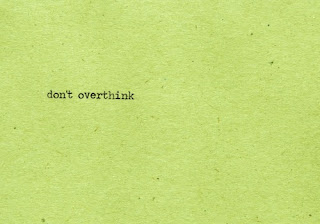 It's a funny thing.

When Michael first died...I didn't think about anything but how I could possibly die to be with him, or how much I wish time would fly by.

Everything else fell to the wayside and didn't consume too many of my thoughts.

There was a freedom in not thinking about much else.

But there was a moment in the past year where I looked back in retrospect and thought, "What the hell happened?!"

I found that as I became more conscious and willing to live, the more I started overthinking EVERYTHING.

What people were thinking of me and my actions. What I would eat. Where I would go.

My mind was in overdrive and in unconciously holding me back from living life to the fullest.

I couldn't even tell you if people were ever thinking those things or if the things I personally overthought were necessary or relevant.

But I say this in the most non morbid way that a widow can...It's been nice reverting back to the way my mind was when Michael first died (minus the bad stuff noted above).

We tend to overthink. If we could eliminate the “over” and just think, then we could do, too. Only we’d be smarter doers because we’d be thinkers.”
― Sarah Strohmeyer