For three years and a couple of months now, those words and that concept has been one that I simply cannot deal with or even picture. For 3 years, the very idea of someone else, someone other than my husband who I'm supposed to grow old with decades from now, sent me into instant panic. It still does. It still makes me shake and feel like maybe I'm coming down with something. In the beginning, and for maybe the first 2 years post-loss, whenever anyone even mentioned me possibly thinking about "dating" again or "getting back out there" or any of those other cliche and expected things put upon me, I would instantly feel sick to my stomach. The very concept of someone else literally made me sick.

Not too much has changed in 3 years. I no longer feel physically ill at the mere mention of a non-Don human coming my way, but now it is more of an extreme intense sadness. About a month ago, my grief-therapist innocently asked me in session: "So how are you doing with the whole relationships thing? Have you thought about it at all?" I started sobbing. Just instant sobs. Another time, more recently, she asked me if any "opportunities" had come my way, and how I felt about it if they had? Again, sobbing. She looked almost shocked, which is rare, and like she truly felt empathy for me and didn't know how to help. She just said: "Wow, this topic is really loaded for you, isn't it? I think it might be a very long time before you are ready to even be able to consider this as a possibility in your life. And that is totally okay. Don't let anyone push you. You aren't ready. But that doesn't mean you won't be one day. Just sit with it for now."

Okay. Sit with it. She says that a lot. At first, it kind of annoyed me. Sit with it. What the hell does that even mean? But now I get it, and I actually sort of like it. It means I don't need to be ready to move forward in this particular area right now, and that I will be ready whenever I'm ready. So don't stress over it - just let it marinate inside your heart for awhile. Sit with it.

So that is what I have been doing. The problem is, when it comes to the concept of "someone else," everyone else on earth seems to have an opinion and a judgment about it. Not only that, but people of the male variety have been approaching me a lot lately, asking for my number, talking and flirting with me out of nowhere, and generally making themselves known to me. This is very foreign to me. I was married for almost 5 years, and before that, I was with Don for an additional 8 years or so. So for about 13 years, I was with Don. And then he died. And now, it seems, the way that guys approach women has changed severely. Lots of times, I will be walking home from the subway, and a  guy will just appear out of nowhere, and start having a conversation with me. "Hey what's up? Are you single? Can I have your number? ", and that sort of thing. I really don't understand this. Is it a NYC thing? Is it a modern-day thing? Or am I just running into lots of extremely aggressive men, over and over again? And the thing is, with 95% of these men that come up to me, they are not the kind of men that I would ever be interested in. Lots of them happen to be weird-ish or just too aggressive for my liking, or tilting on borderline creepy. 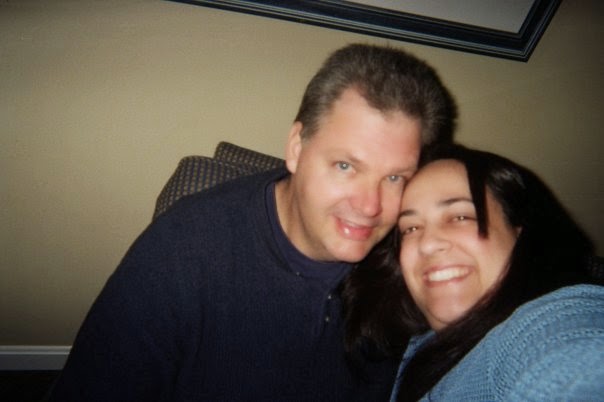 One night, about 2 months ago or so, I was walking home from the subway in my very busy neighborhood in Queens, and I was about maybe 7 blocks from my apartment, when a man seemed to appear out of nowhere and started a conversation with me. "Hi", he said. "Hi," I said back, as if it was normal this person was talking to me so casually. He continued walking with me and having small-talk. His existence threw me off a bit, because he was, in many ways, very Don-like. He was wearing some kind of security uniform, which was blue, and looked a lot like my husband's old EMS uniforms. He had dark hair like Don, and he was wearing a Mets hat, which I immediately mocked him about. "Mets? Really?" He playfully mocked me back about the Yankees jacket I was wearing, and before I knew it, we were only a block from my apartment. I made the decision in my head to tell him I was stopping at the Dunkin Donuts that is on that corner, because I did not want a total stranger knowing where I live. So we stopped, and he said: "Can I pleaase have your number?" I told him no, that I didn't think so. He said: "Are you single? Cuz if you're not single, I'll leave you alone." I said: "It's complicated. " He said, in a kind of funny way: "What's complicated about it? You're either single or you're not single. Which is it?" I said: "My husband died 3 years ago, and I'm just not anywhere near ready for giving out my number and things like that."

It just sort of came out - me telling him that. He was the first guy that had approached me that didn't give me a creeper vibe. He said, very sincerely: "I'm really sorry. That is awful. I'm going to just write down MY number and give it to you, and this way if you feel like talking or just wanna get some coffee, you can call me." So he gave me his name (Stephen), and his number. He said he lived right here in the neighborhood and works as Security in the local Mall, and I said some crap about how maybe we will run into each other again sometime. Non-commital. Vague. Weak.

We parted ways, and I walked around the corner and dissolved into hysterical sobs, right there in the open, autumn air. It affected me for days afterwards. I kept crying over and over. Crying because I'm not ready. Crying because I don't know if I'll ever be ready. Crying because I don't WANT to have conversations with strangers on the street and have to try and decide whether they are sane or not - I want my husband back. Crying because the fact that this person is talking to me and asking me out, means that I can't just sit with it forever. I can't just put "relationships" on a shelf somewhere and pretend that I no longer need that. I can't just keep myself super busy with life and friends and work and creative things, and hope that I never notice that it's been years since being intimate with someone or being someone's priority. Crying because the world moves much faster than what I feel ready for. Crying because I miss my husband, and talking to a perfectly nice guy for 10 minutes, does nothing but put a huge exclamation point on that fact.

So two months went by. I didn't think about it much. I did not call him or even think about calling him, honestly. Then last night, I was walking home again from the subway, after a super long day working and then some fun with friends in the city, and suddenly I hear from behind me: "Hey! Hey! Hey! Hey Yankees! Yankees!!! Hey Yankees!" I turned around, and he is running after me, to catch up to me. I am a block from my apartment, on my street. I stop. He says: "Sorry to yell out Yankees like that. I don't know if you even told me your name last time. Do you remember me?" "Hi Stephen", I said. We did the small-talk thing again for a few minutes, and then he said: "So you gonna give me your number this time?" Again, I said no. As nice as this guy seems, I dont know him. What if he is some stalker who won't stop calling me months from now when this all goes haywire? What if he sends me a "dick pic?" (that's what people are doing these days, right?) What if he wants to start "sexting" from our cell phones? No. No, no, no, no, no. I just cannot live in that world. So again, he wrote his number down on another piece of paper, and we left it at that.

And now, I am not sure where to go from here. He seems like a nice person, and what could it hurt having a cup of coffee with someone? Then again, a guy who randomly approaches strangers on the street must have issues. The whole thing is just odd to me. And why me? Why did he pick me to approach? Both times he stopped me, I looked like absolute hell, so it can't be that I was just so alluring and gorgeous that he HAD to talk to me. It doesn't feel like it's a match of any kind. I didn't feel any "spark" or anything like that with him. He was simply a nice person. There is a small part of me that wonders if Im supposed to have coffee with this dude for some reason - because now it is TWICE that I have run into him this way. I don't know. I am not ready for any of this. I really don't want to be a widow anymore, and I really hate the reality that I am now "single." I am not quite sure what to do with this place that I find myself in.

I suppose I will just have to sit with it.