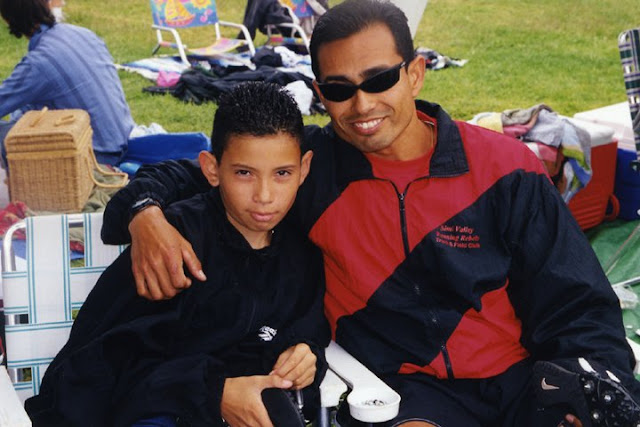 And I can't sleep. This used to be a normal time to be sitting at my computer fingers tapping, and tears streaming down my face. I can't count the number of times my feelings have been pounded out on my keyboard, but its been a good long time since the familiar ache of missing Phil has kept me awake into the wee hours of the morning. My heart is aching in that unforgettable way, and I knew you would understand. So here I sit covered in blankets, futilely trying once again to reconcile the fact that Phil is dead.

This afternoon a good friend sent me a message. I opened the e-mail on my blackberry and saw a link but no greeting. After a quick glance I decided to investigate from my computer later. The indecipherable text was forgotten until I was working in my office later in the day, and remembered to open the message. All I found was a note that my friend shared a facebook page with me created by the community track team that Phil coached with for ten years. I clicked the link and immediately felt the oxygen being sucked out of the room. There were three photos of Phil among a gallery of old track photos posted front and center on the screen in front of me. The tightness in my chest that used to make my breathing shallow and my head ache returned as if the five years since Phil's death was only five minutes. I sat just staring at the photo above.

There is something about this picture that trumpets everything I lost when he died. This pose is so him. I know him, I can hear his voice, I can almost smell him, and I can hear his laugh in the corners of my mind. As I sat dumbfounded by my reaction, the grim helpless feeling that follows the realization that I can't turn back time began creeping in on me. The questions that used to torture me when the house was quiet and I was alone came whispering tonight...Why is this man dead? Why does this 100 watt smile only exist in my memory? Why does the boy in this picture have to mourn the death of his father? Why is it that one photo, one moment in time can throw me with such speed back to the helpless, breathless, unfair reality that dead is dead?

When I watched the photos of the track team scroll by on my computer screen I was gripped by a piercing longing for what used to be. Not because I am unhappy. Not because the life I live now isn't wonderful in ways I wouldn't have believed possible five years ago. Not because I don't love the man I am now married to who has blessed my life in countless ways. But because it still sucks that Phil is dead. When this hilarious, mischievous, infuriating, dedicated, stubborn, kind hearted, single minded man died, the rest of us were robbed. Sometimes the force of this reality still takes my breath away.
Posted by Michele Neff Hernandez at 5:43 AM