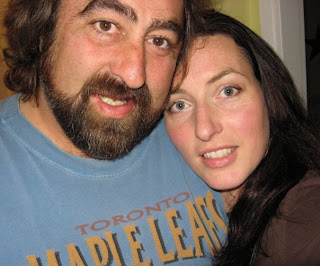 Some of the fishing companies that Jeff had worked for would provide jackets for the crew with their name embroidered on the shoulder. Once when asked what Jeff wanted marked on his sleeve (he had a plethora of nicknames that could of been used in his name's stead), he had remarked, "Just Jeff". When his coat arrived with "Just Jeff" scribed upon the arm, he had thought it was ruined. I had thought it described him perfectly.
Recently, I have noticed that the person who Jeff was and who Jeff is now imagined to be has shifted. I feel that I alone (aside probably from his mother) can remember him with his real faults and with his true strengths. To others, he has become an icon.
I've heard him described as a 'Viking'. I've heard another express that he thought Jeff would have loved playing a Wii. When telling a dear friend how Liv had a MASSIVE temper tantrum and that I had (in the heat of the battle) told her that her father would have not stood for her hitting and kicking me, the friend said, "Oh yes, he would have. He was a sucker when it came to her."
I understand that the phenomenon that occurs when someone has died - they become someone in many people's eyes that they actually weren't while they breathed. But it angers me. I find myself correcting other's opinions, recollections and estimations of Jeff's personality. At times, the listener wants to stubbornly hold onto their new 'version' of Jeff. They argue with me, "I know Jeff would have given Briar a toy gun!"
But they're wrong.
He was huge, tall and strong. He could be crushingly terrifying - but he wasn't a warrior....at least not once he was old enough to have some sense. Jeff hated video games and thought they were a waste of time. Although Liv had Jeff in her pocket, he believed that children must treat their mothers with respect and kindness and at times, he was annoyingly intolerant of her childish ways. Jeff did hunt. He had guns. But he swore that they were not toys and that he would teach both of our children the proper use of these tools.
I am amazed and resentful that some people believe that they knew him like I did. I despise the image that they have created. I want to remember him as he was - Just Jeff.
Posted by Jackie at 5:00 AM