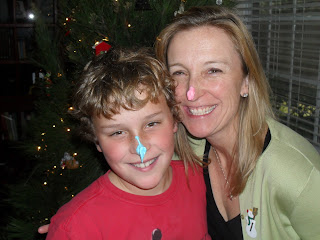 Like it was yesterday, I remember the night Daniel died and the drive home from the hospital. The drive home to G, who was innocently sleeping, still unaware that life as he knew it had radically altered. I remember talking myself through telling him what had happened. I remember feeling so sick to stomach and so anxious. I knew that the next few moments would be something he remembered his whole life, and I knew I couldn't mess it up.

Since that morning, it has been my highest priority to make sure that G has had everything he needs for as complete of a recovery possible. I want no doubts that I have done everything I can and that he will have a healthy and normal life, regardless of such a huge loss. I know there are no guarantees, but I don't want to ever wonder if there was something I could have done that I didn't. Highest on my priority list of things that he needs is this: he needs to learn the lesson that it sucks that his Dad died, but it isn't an excuse to let life get you down or to expect special treatment. Bad things happen to us all the time, we can't let them cripple us, and the world isn't going to tiptoe around us because of it.

The challenge with this lesson is that occasionally people do give him special treatment. Teachers are the worst culprits. They love children and generally have very soft hearts. They hear his story the first week of class, and then suddenly their standard for performance goes out the window. "Poor baby, he lost his Dad. We can't expect him to focus on....." You fill in the blank. In the past five years, this trend has gradually declined, as he is further and further away from the loss and they know it. However, the tendency towards lenience is still there. I suspect that they give him more chances and are more easily swayed by his charm. I think they grade him slightly easier and give him slack they don't necessarily give to all of the kids in the class. I fear that they are weakening him with their kindness.

I may be wrong. I may have set in my mind a high standard that isn't the norm in current schools. I'm not a teacher, so it's possible. I'm open to that. My fear is that I'm not wrong though, and next year, when G has 6 teachers in middle school - he'll drop into reality with a thud and be expected to perform without any special attention from his teachers and regardless of the loss of his Dad. I hope I'm wrong. I really don't want to find out that my "no excuses" plan for him has been undermined. He is a strong smart child. I really hope to find out that they have been treating him like one.
Posted by Michelle Dippel at 4:00 AM