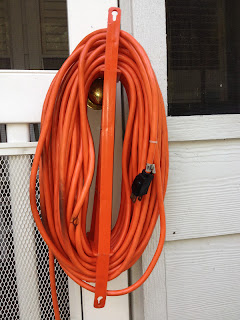 (not wound so perfectly after I used it)

One day last week I noticed that some of our shrubs were looking like they had "just woke up hair"(yes, I do have some "shrubbery", for those of you who know what that means!  :)
Branches were sticking up at embarrassingly odd angles ...... kind of like something out of a Dr. Seuss book.

So I decided to give them a trim, before I received an ugly note from our home owners' association (don't get me started).
I hauled out the hedge trimmer and the extension cord to get the job done.
But then something hit me ...... and I was stopped cold.

The extension cord was not just an extension cord.
As improbable as it seems, it was a "wave".
Not a huge wave, but enough of one to really stop me in my tracks and take a few deep breaths.

You see, Jim was the last person to use, and thus wind, this cord.
It was perfectly and tightly wrapped around the plastic frame.
Still tightly wound after he last used it ...... 5 years ago (which I realize gives you more of a mental picture of what our shrubs looked like :)

When I reached up to take the cord off of the shelf, I never suspected that it would be anything more than an extension cord.
I didn't see that wave coming, so it hit me from out of nowhere.
And as I sit here and try to tell you this story, it seems very silly and rather difficult to understand, as well as to write.
But I know that you get it.
Or at least I hope you do.
It makes more sense in my head than it does in written form.
But I'm going to forge ahead and hope that it makes sense to someone else, too.

I stood there in my yard, letting the wave wash over me.
If a neighbor had been watching, he or she would probably have wondered why I was hesitating so long ......  just standing there staring at a cord in my hands.
And if someone had asked me what I was doing, I would've replied, "Remembering."

Because that's exactly what I was doing.
This wave that had snuck up on me wasn't the usual type that threatens to knock you to your knees ...... and seems to suck all of the air out of your lungs.

It carried several emotions with it, as they usually do.
But it also carried memories.
And they were good.
As were most of the emotions.
I think it was the first time I didn't mind getting hit by one of the waves.

I still hesitated about unwinding the cord, but not for very long.
Yes, unwinding it would be un-doing one more thing Jim had left behind.
But now I know that there are very many things he left here that cannot be undone.

Like our children (who can't be undone even though there are sometimes brief moments when I might wish otherwise!).
Thankfully, the different ways that they each look like Jim cannot be undone.
Nor can the love that he filled them with.
Or the lessons he taught them.

The impact that he made in our community and the legacy he left behind in our school district can't be undone.
They might one day be forgotten, but not for a very long time.

The time that he spent on a weekly basis with a group of middle school boys in our church can't be undone.
Nor can all of the Indian Princess/Indian Guide campout memories he gave to our children.
Or his wonderful, dry, sarcastic sense of humor.

And, no matter how much time goes by, or how many things change during that time ...... no matter who may come into my life, and into my heart ...... the love he gave me, and the woman it grew me into, will never be undone.
Ever.
I am who I am today because of him.
The unconditional love, support, acceptance, accountability, security ...... and confidence he gave to me  will be with me for the rest of my life.  And with my children.

So yes, that extension cord was more than what it seemed.
It was a wave.
But it was a wave that left me smiling, rather than crying.